How Can I Prevent Mould Growth In My Shower? 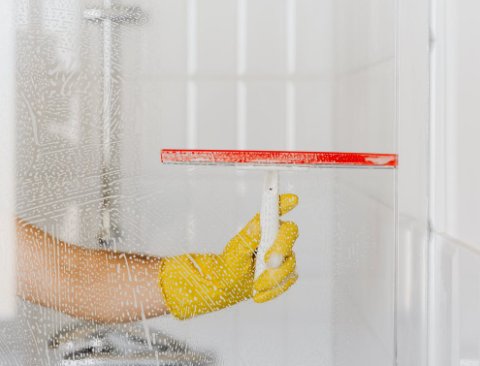 Mould is unsightly and can also be a major health hazard. Bathrooms are prime real estate for dangerous fungal growth, and once it’s established, mould can be almost impossible to remove. Here’s how to avoid it!

What Is Bathroom Mould and Why Is It Dangerous?

Mould is a type of filamentous fungi. A little bit like a plant, it is a complex organism that when in the correct environment will grow, feed, and reproduce. When it reproduces, mould releases microscopic spores that latch on to surrounding surfaces where they grow into a new bloom within 48 hours. Mould spores are easily inhaled, resulting in a range of potential health outcomes, including allergies, respiratory irritations, asthma attacks, and toxic poisoning. The consequential liver and kidney damage can be life-threatening.

How Does Mould Become Established In a Bathroom?

Mould spores are present in every household, but they only settle and reproduce if the environmental conditions are right. Warm, humid environments give the fungus the moisture and energy it needs to flourish, whilst organic materials provide its food. Human skin cells provide a particularly nutritious feast, so a quick shower can leave behind a buffet for unwanted guests. Damp walls and ceilings are also tasty snacks for fungi, which is why bathrooms are such hotspots for mould.

How Can I Prevent a Fungal Outbreak In My Shower?

As mould requires humidity and a food source, controlling each of these is crucial. Bathrooms therefore need to be well-ventilated, ideally with an extractor fan positioned directly above or close to an enclosed shower cubicle. Limiting the food source is dependent upon hygiene, with the ideal scenario being that showers are cleaned after every use. Even though many individuals have good shower cleaning routines, the design of the unit makes a significant difference. For instance, fixtures and fittings that are hard to access can create real problems, whilst water that splashes over the edge of an inadequate shower tray to pool in inaccessible places provides a fertile feeding ground.

Can a Shower Pod Help To Reduce The Risk Of Bathroom Mould?

The two principal design features of bathroom pods are that they are leak-proof and hygienic. When the shower is contained within non-porous enamel, glass, and high-quality sealants, there is no chance of water escaping and creating a mould-hazard. Hygienic design complements this in two ways. Firstly, by being a self-contained unit, pods eliminate spaces where water can linger, such as in-between tiles. Secondly, every area of a shower pod can be easily reached for deep cleaning, including traditionally problematic areas such as door frames and sliding-door running tracks. As such, the result of opting for a shower pod is to remove the main risk factors for mould.

Unsightly, dangerous, and expensive to remove, mould can be a hazard in more ways than one. By taking away the factors that encourage mould to thrive, shower pods are an excellent way of keeping bathrooms safe and sparkling. For more information, have a chat with one of our service team, or [click here] to request a free copy of our Ultimate Shower Pods Guide.